Welcome to another great tropical day of flying. The field is looking in great shape.  Wish i could say that about our mower... The little rain we have had has greened things up nicely. Now the endless mowing begins... 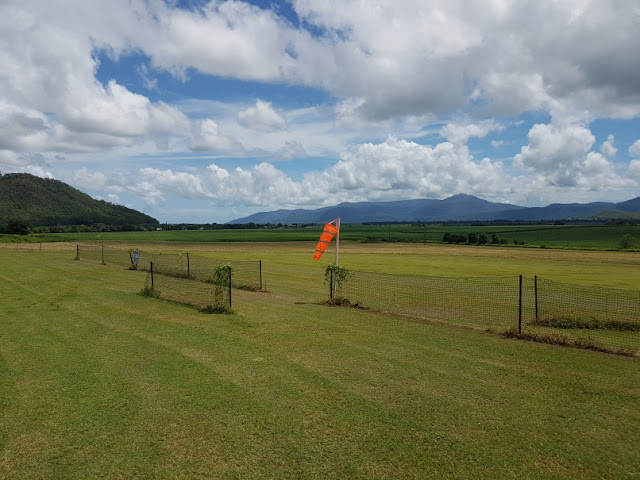 A good crowd began to arrive early to beat the heat and the afternoon breeze.. 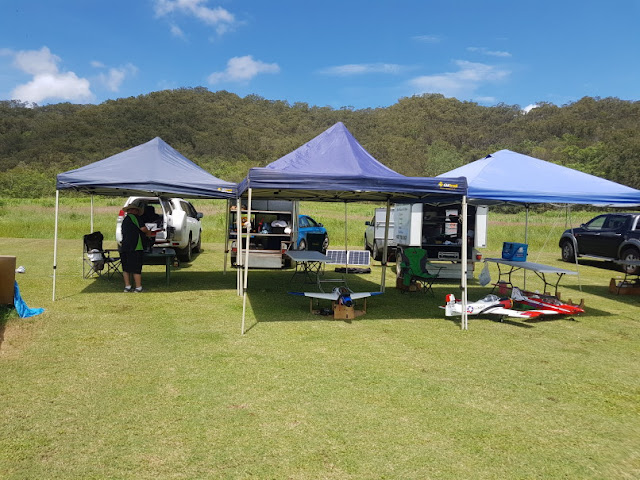 Barrie's hanger unfolded... A lucky flight with the glider when all signal was lost only to see the glider smoothly circling and slowly descending finally coming to rest without any damage. Wow Barrie you really do know people in high places.. 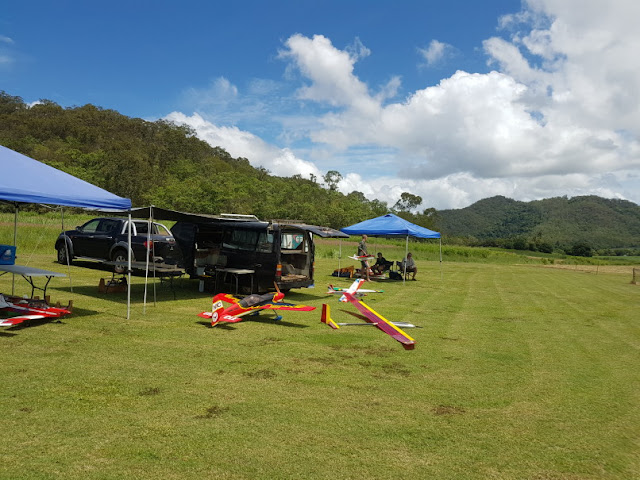 Anthony was noticed in the pilots box with a strange looking aerial on his transmitter. Looking a little closer we could see that he was just being a bit of a prude. He didn't quiet like the amount of sun he was under.. Is it time for tea and scones.. 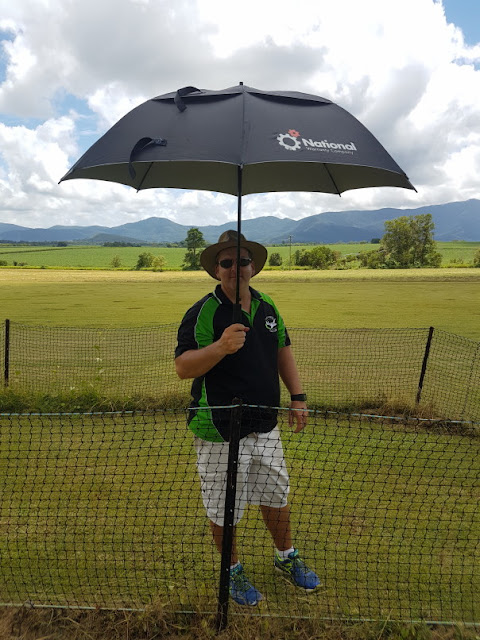 Finally willing to risk a bit of sun burn Anthony gave his Pc9 a good flogging. 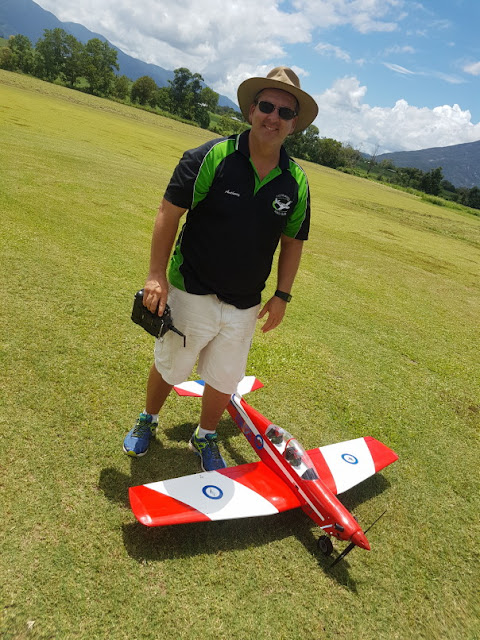 The Trojan had a few flights but suffered from a very sick engine. It appears the front bearing has had better days. 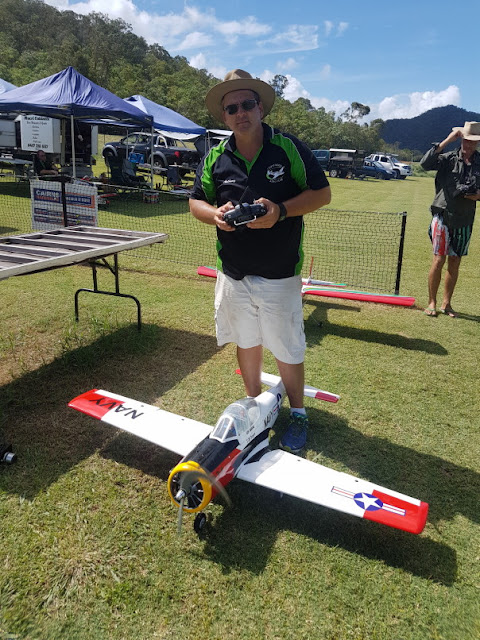 Soon followed with his 35cc Sbach.. 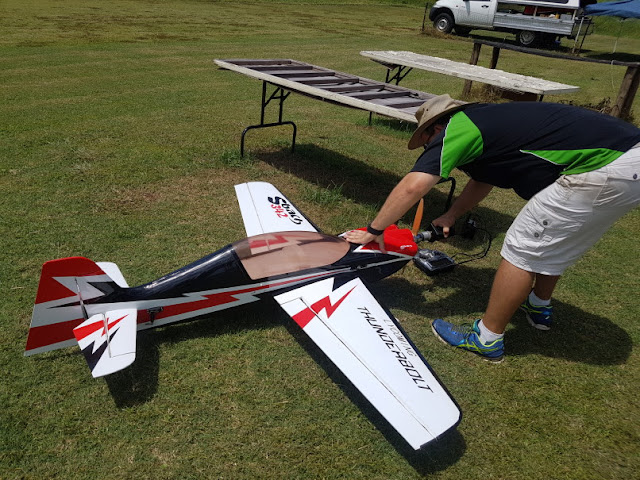 Continuing with his ever reliable foamy cub. 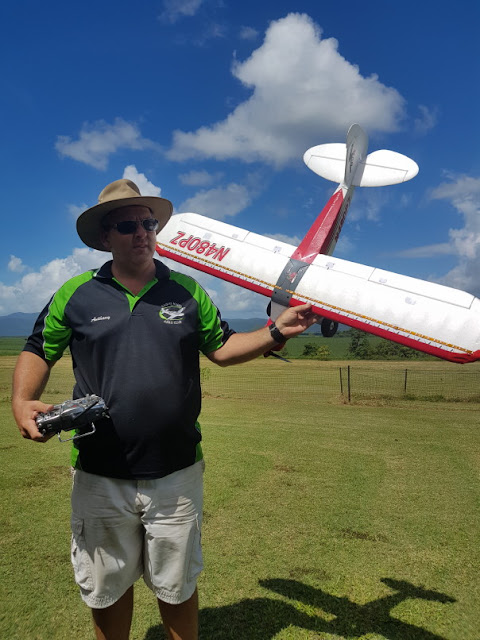 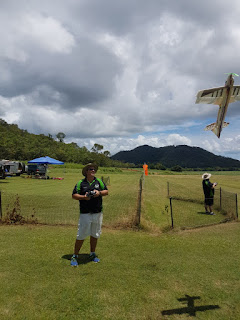 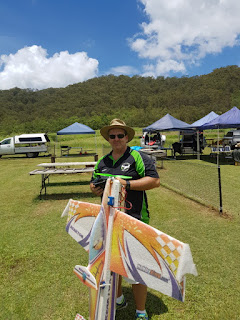 Curtis began with his extra 300 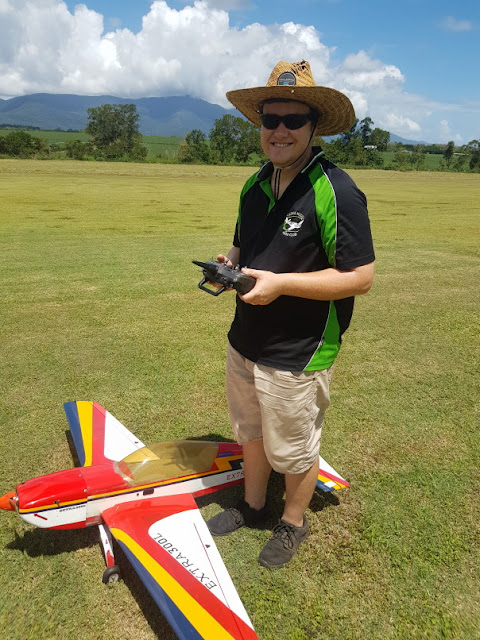 His mustang proved a little tricky on take off but once that was sorted it flew fantastically.
Looks real good in the sky 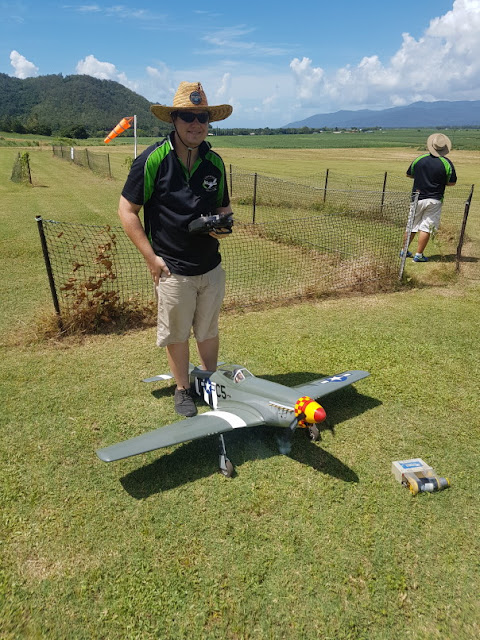 Following on from his miraculous glider flight Barrie put his S.E.A.5 through its paces. 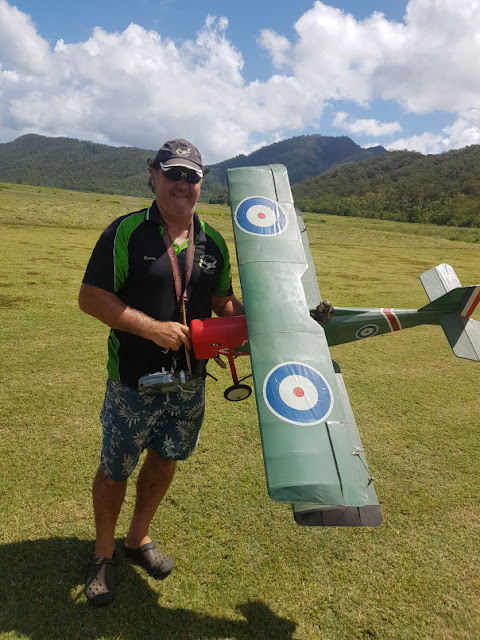 A little adjustments to his raven prior to first flight. 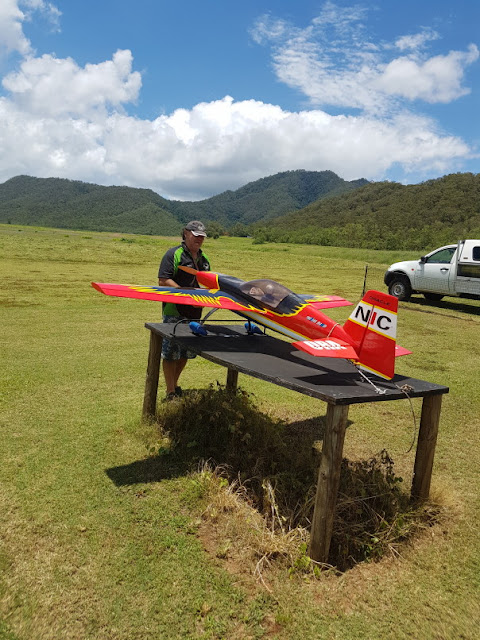 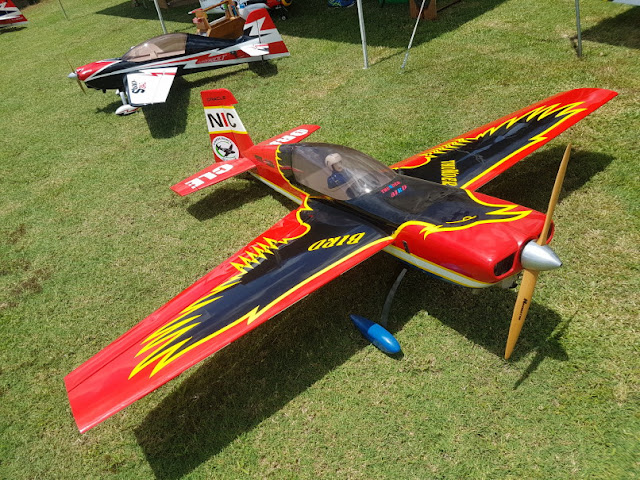 Newly crowned Silver badge holder "Geezer" was quick to get his classic sport 40 up and flying. 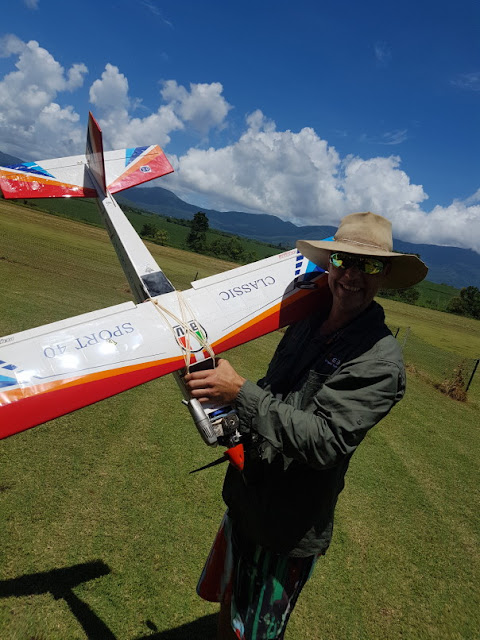 Didn't take long before he started to get bigger and better targets.
Here prior to its maiden flight is Geezars new 60 size Boomerang sporting a nice Saito 82 four stroke.
Flys very nice. Just a little trimming to do now. 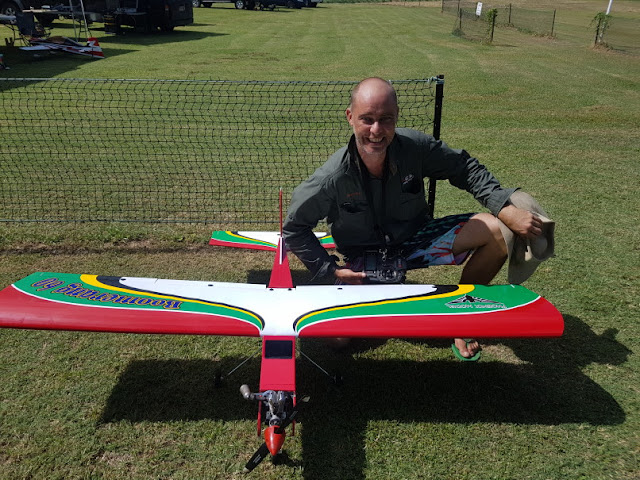 Why Wait..... Geeza with his new purchase. Just try and wipe that smile off his face....
AAH the smell of burning Kero. 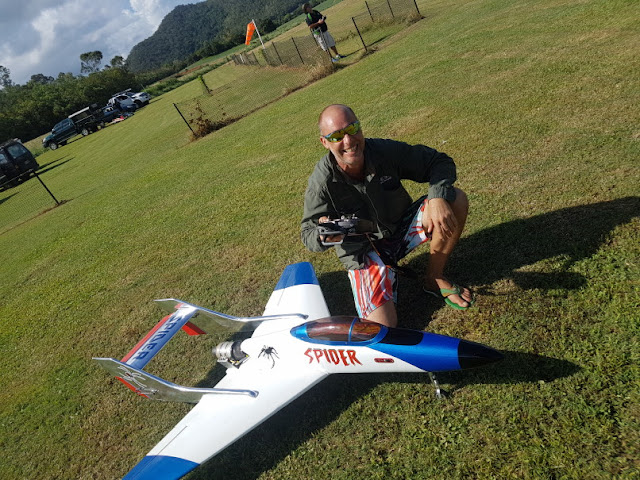 Capt Jack was out in force.. 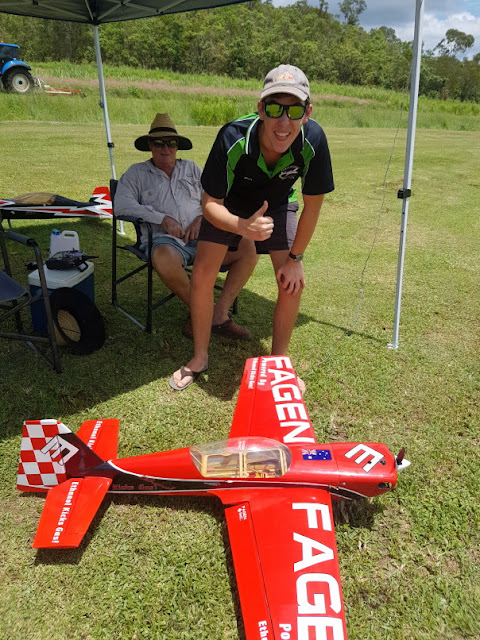 Holding the baby Sbach of the fleet didn't mean anything once Jack gets it in the air. 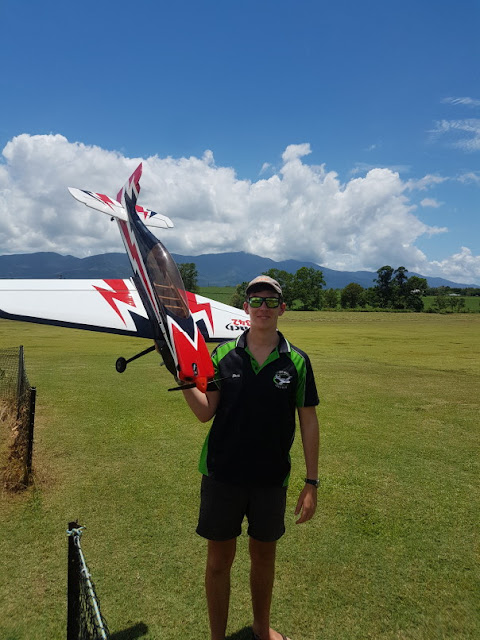 Billy getting ready to put his 60cc Sbach through its paces. 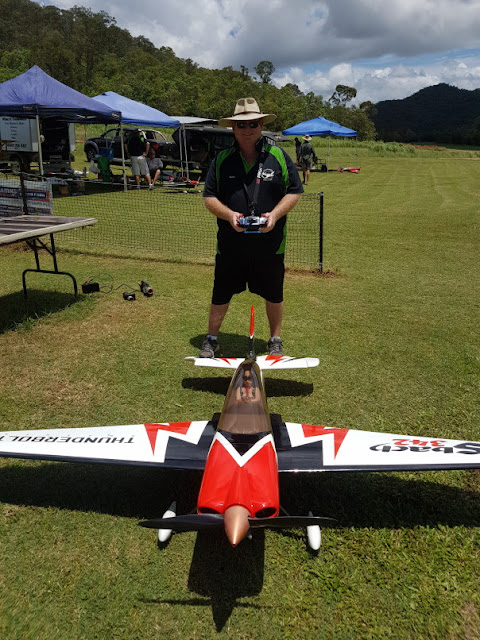 Again stunning everyone i actually got an aircraft ready to take flying. 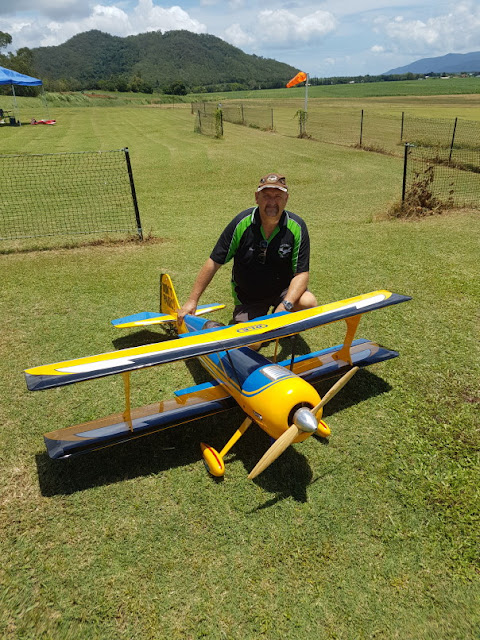 Unfortunately the Pitts didn't like being left in the hot trailer all week or being out in the sun. Anthony where is your umbrella. The fuel tank had a hemerage and split leaking its full load of fuel into the airframe. Oh well there is always next week... 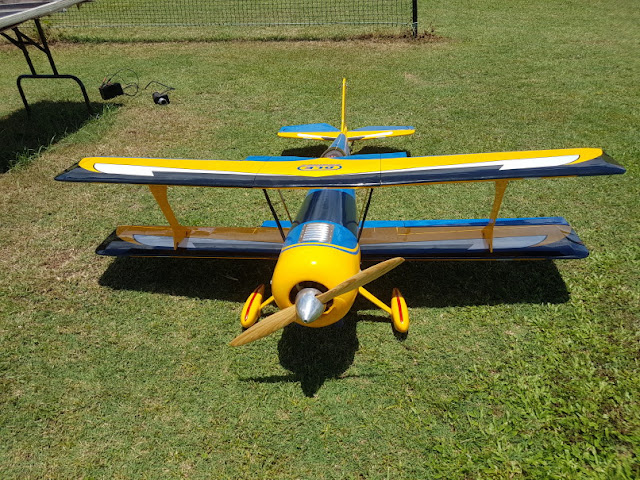 James AKA mister Spectrum was having some fun with his pits. 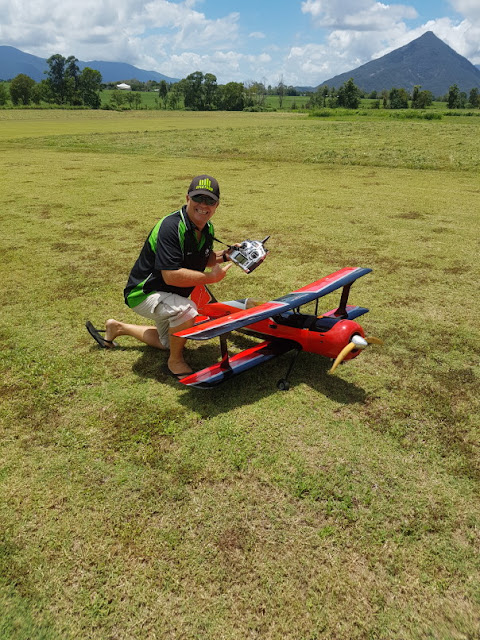 Finally plucking up the courage to give his newly renovated Falcon a fly. 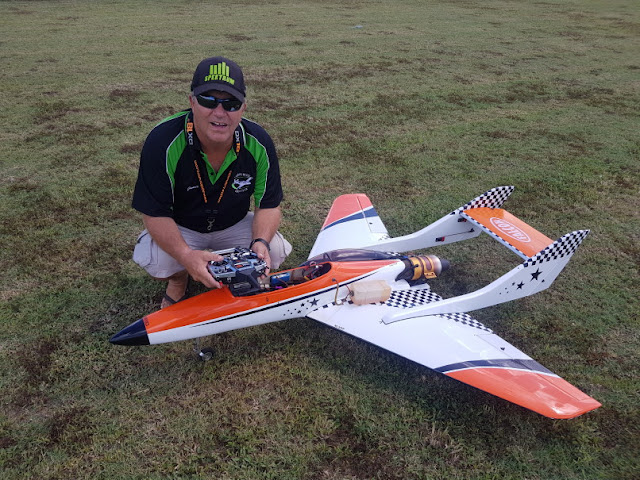 The take off was fine except for a broken right main leg hanging by its wiring. Lucky it only gave way after the aircraft had left the ground... This meant the landing was always going to end in tears...
After considering all options James decided to make a low, slow run and nose it into the long grass at the end of the strip.. All went well but as for these very secret and uncensored photos show...
Damage to the fuselage and left wing... Lucky he has a spare airframe so rebuild here we come.. 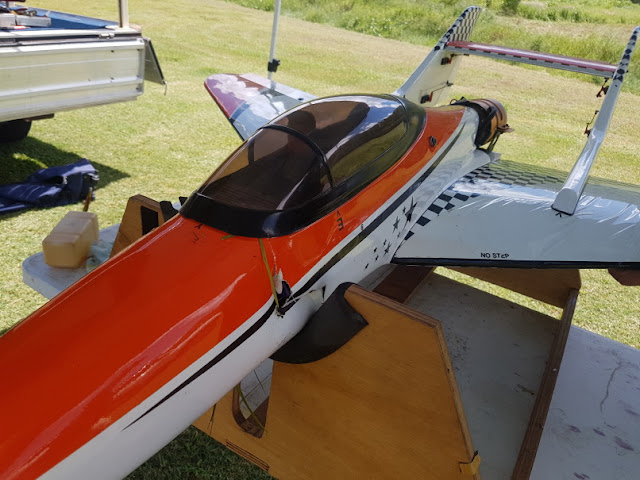 Here we have the answer to the Roulettes with a team of Sbachy drivers trying to muscle in on their territory. 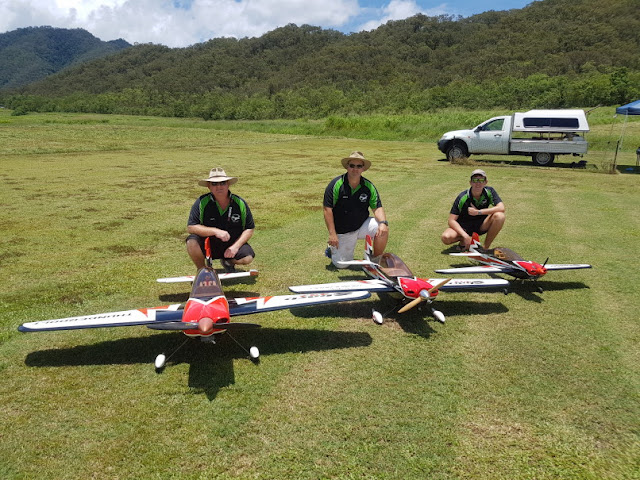 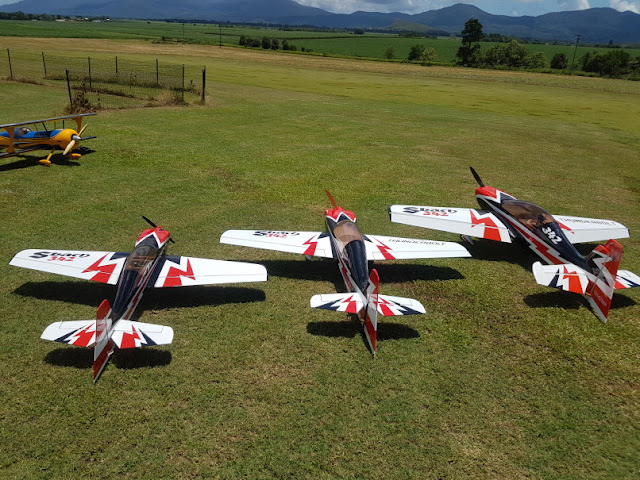 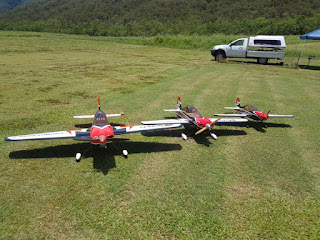 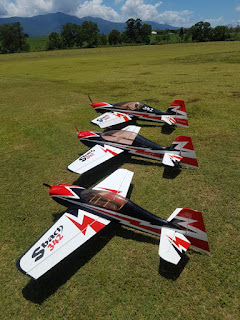 Another great day flying and we hope there is a lot more to come. We had the pleasure of a couple of new members arrive today and are getting forms filled out ready to join the kaios oops i mean the fun at CMAC.. Great to see and a very big welcome aboard..

Don't for get to support our now weekly sausage sizzle. It all helps keep that grass monster on the field..